Article in Guatemalan Newspaper talking about our latest project!

The following article was in the newspaper in Guatemala this week talking about the school project that GAPKC raised money to support.  We raised $2000 which will give the school new windows, a roof and flooring and a fresh coat of paint.

I will post a slideshow when the work is completed. The materials have all been delivered and the village is doing the work now.

Here is the link tot he article:  http://lahora.gt/ninos-adolescentes-maestros-reciben-apoyo-centro-educativo/ 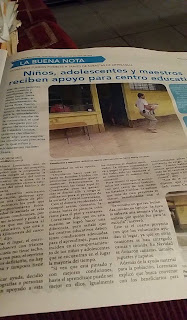 Here is the English Translation:

More than a hundred people, including teachers and students from the village Irayol , Santa María Ixhuatán , in the department of Santa Rosa , were benefited with a donation to be used for remodeling the school. The donation was granted by a group of US volunteers who decided to do something to improve the precarious conditions in which children and adolescents are taught .

Marco Lorenzana , one of the members of the project, explained that the aid proposal arose when observing the precarious situation of the village school , where classes are taught to students of basico (middle school/high school) and elementary.
"Teachers requested assistance if a bucket of paint could be provided to brighten the school. I then asked them to provide us with photos. The school really looked in terrible condition , so I was interested and asked the teacher to take me to school , which is about 14 kilometers from the town.

When visiting the site, the interviewee noted with sadness that the school has no roof, has no floor, the bathrooms are in poor condition, there is a kitchen and has no doors.

To seek help, he decided to send photos to people who have supported this community in other opportunities.

"They decided to have an auction in America with Guatemalan handicrafts with things purchased here in Guatemala, all money was then used for the school project, "said Lorenzana.

Lorenzana said that this time it made a difference but said that schools should have adequate conditions for learning, as these affect the behavior of children and adolescents who are in place most of the time.

"If they see the school is painted and in better conditions they are more motivated to learn. Teachers feel equally motivated. The community is going to lay the floor, they will do everything, just the windows themselves were placed on the same day, "he said.

To raise the economic contribution volunteers worked for about two months in the United States. It is estimated that over a hundred people were benefited with it.

"Caps, scarves, typical dolls were sold. The auction was held for a week and the money that resulted sent to help the school, "he said.

This is the fourth project that volunteers have help in this place, and at other times have been given beds and food. At Christmas baskets, tamales, toys and shoes were donated.

In addition to material aid to the population, Lorenzana explained that he seeks to talk with beneficiaries to make them aware of the importance of demanding their rights. "I speak in generalized terms, that more than 20 schools are in the same or worse conditions," he said.

"The community told me that as a community, as COCODE have made requests to the mayor and nobody had done to them. They thanked the management. The project's success is not to be done, but take care what you do and pledged to do to take care of what they received, "he said.
Posted by Susan at 6:21 PM